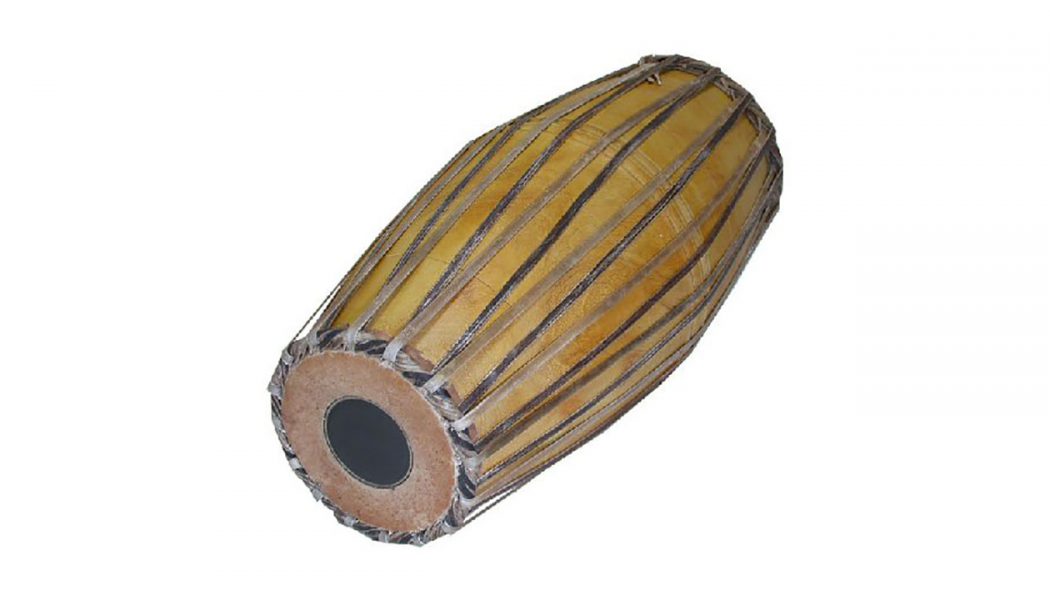 Mridangam, a percussion instrument, is the primary rhythmic accompaniment in Carnatic Music ensemble. According to Hindu Mythology, the origin of Mridangam is connected with Lord Nandi the escort of Mahadeva. During the Tandava dance by Lord Shiva (Mahadeva) Nandi seemed to have played Mridangam. It is also connected with Lord Ganesha the remover of obstacles.

The earliest versions of Mridangam were made of hardened clay, suggesting the origin of its name from the Sanskrit words “Mrttika” and “Angam”. Mrttika means Clay or Earth and Angam means Body or Limb. Hence Mridangam means a body made out of clay.

A double-headed barrel-shaped drum, the present Mridangams are made out of single hollowed-out piece of wood. Normally the wood of Jack tree or Rosewood is used to make its hollow body. The left side is usually 6.5 to 7.5 inches and the right side 6.5 to 7 inches in diameter. The Mridangam is about one-and-a-half to two feet in length.

The left and right sides of the body are covered with layers of skin. The left-hand side skin, which is the Bass side (Thoppi), is made up of two layers of skins. The outer skin is of buffalo and inner one is of sheep. The right-hand side of the Mridangam (Valanthalai) is made of three layers of skin. The outer skin is called “Meettu Skin”, inner one is called “Chappu Skin” and third one is not visible. The Meettu Skin is of Calves and Chappu is of Sheeps. The layers of skins on both sides are stretched and kept intact by means of a plait called chattai or pinnal made of twisted leather straps.

In the middle of the right side a black coloured gum is pasted which is called “Karanai”. Karanai is made from a mixture of Manganese podwer, Rice, Iron powder etc. The Karanai is rubbed with hard black coloured stone to make it very hard in the middle and loosely packed at the end. This combination enables the Mridangam to produce very sweet Nadam. Before each performance, a mixture of Rava (Semolina) and water is applied on the left side of the Mridangam. This lowers the pitch of the left membrane and gives it a very powerful resonating bass sound.

Mridangams are tuned in such a way that the Shruthi on the left side is one Octave lower than that of the right side. The Shruthi of the right side is set normally to match the Aadhara Shadjam (Sa) of the singer. Before the performance, the Mridangam artist tunes it by varying the tension in the leather straps spanning the hull of the instrument. Mridangam is placed upright with its larger side facing down, and then striking the tension-bearing straps located along of circumference of the right membrane with a heavy object (such as a stone). The pitch must be uniform and balanced at all points along the circumference of the Valanthalai (right side) for the sound to resonate perfectly.

The Mridangam rests above the right ankle, the right leg being slightly extended while the left leg is bent and rests against the hull of the instrument and against the torso of the artist.

Cost of good Mridangams for professional use varies from Indian Rupees 10,000 to 20,000. There are people specialized in making Mridangams and usually the artists buys directly from such people.