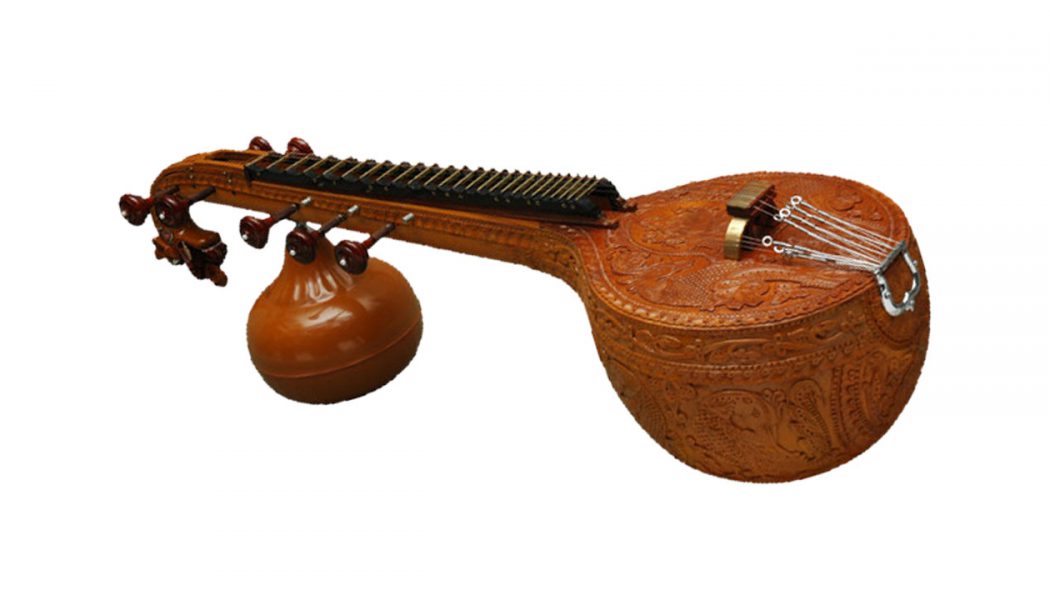 Veena is another Plucked String Instrument belonging to the Chordophone family of musical instruments. The origin of Veena is from the Indian Subcontinent. There are different types of Veenas like Rudra Veena, Saraswathi Veena, Vichitra Veena, Gupta Veena, Kinnari Veena etc.

The South Indian Veena design is a Lute. Lute is a Plucked String Instrument, which has a long Neck and having Frets. It has a rounded body with a flat front and a halved egg shape. Veena is used in South Indian Classical Music as main instrument as well as accompaniment.

The North Indian Veena design which is used in Hindustani Classical Music, is a Stick Zither. The word Zither is derived from the Greek Word “Cithara” and Zither is basically a stringed instrument. Stick Zither has only one flexed end and is rigid. They very often have a resonator like the player’s mouth or a gourd or inflated bladder attached to the body.

The instrument Veena is mentioned in the Vedas and other Vedic Literatures. The Natya Shastra describes Veena as a seven-string instrument with Frets and how it should be played.

Veena is about 1.5 meters long and usually made of Jack wood having a large round body with a thick, wide neck. The end of the neck is usually carved into the head of a dragon. A small resonator is attached to the bottom of the neck. There are 24 metal Frets fitted on the neck of the Veena.

Four main metal strings that are stretched over the wide bridge/neck and sits on the body of the Veena, above the Frets. Other strings run alongside the neck. Melody is produced on the main strings and others are for maintaining time and playing the drone.

How is it played

The Veena Artist sits cross-legged on the floor and the small resonator rests on his left lap. Plucking and Twanging of the strings is usually done by the fingers of the right hand. Fingers of the left hand are used to press, pull and glide on the Frets producing varying pitches. Veena as an instrument on its own produces the basic components Sruthi, Laya and Sahitya.