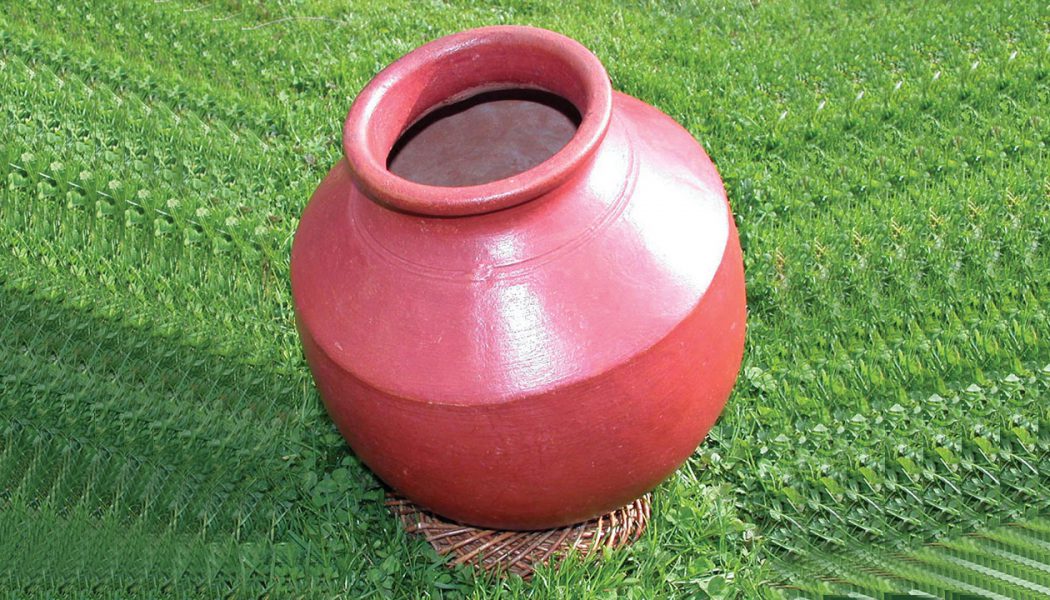 Ghatam is one of the percussion instruments in India. It is basically a clay pot with a narrow mouth much similar to the one people use to carry water in villages. The composition of the materials used for making the Ghatam is much different from that used for making the local clay pots. In Carnatic Music concerts, Ghatam is an integral part and is played along with Mridangam.

It is made mainly of clay, backed with brass or copper fillings and small quantities of iron fillings to strengthen the structure as well as produce quality sound. The pitch of the sound produced by the Ghatam varies depending upon its size. A Ghatam is made specifically to be used as a musical instrument. The walls of the Ghatam must be of even thickness to produce an even tone.

Ghatams are mainly made in Manamadurai, near Madurai in Tamilnadu, though they are also made in Chennai and Bangalore. The Manamadurai Ghatams are known for their tonal quality. The raw material clay is of special quality and the Ghatams are heavy, thick pot. Brass is mixed with clay in the manufacturing process and therefor produce a metallic sound. These Ghatams are harder than others to play but they are favourite of many Ghatam artists.

How to use Ghatam

Ghatam is played by the artist keeping it on the lap with its mouth facing the belly. Using the fingers, thumbs, palms and the heels of the hands, the artist plays Ghatam striking its outer surface and producing different sounds. It is common to move Ghatam in different positions while playing and sometimes the performer use to toss it up in the air and catch. The artist sits cross-legged on the floor with the Ghatam. By pressing the Ghatam to the abdomen and striking its body with lower parts of the wrists, the artist produces the Bass effect. There are artists who perform more than one Ghatam. Electric versions of Ghatams are also available with pickup and amplifier.

Ghatams are available for purchase with different Musical Instruments dealers and prices range from Indian Rupees 1,500 to 8,000 (and up).