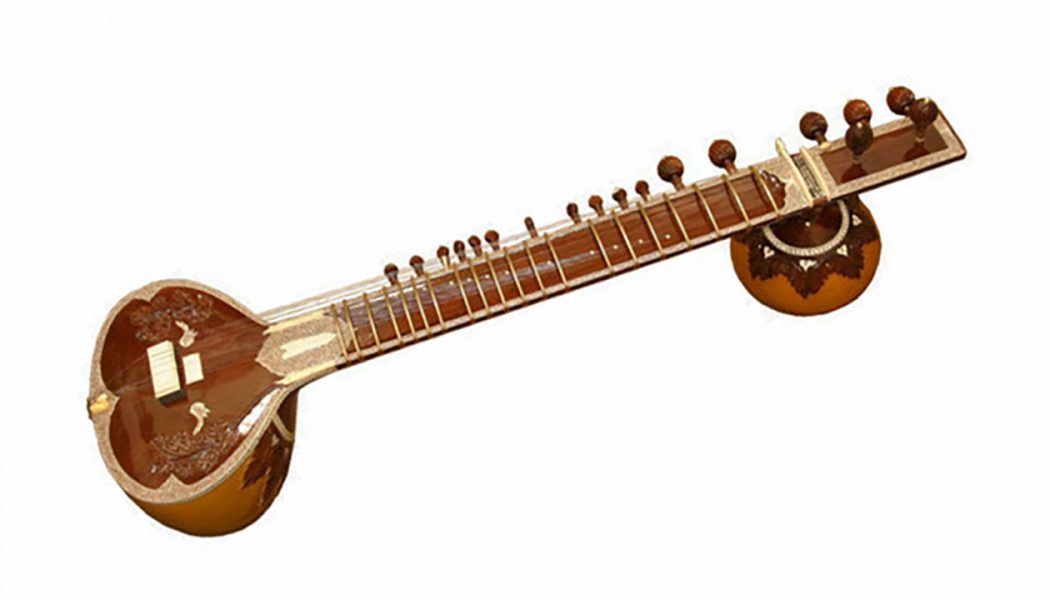 Sitar is a musical instrument belonging to the family of Plucked String Instruments. It is widely used in the Hindustani Classical Music concerts and has an origin from the Indian Subcontinent.

Plucked string instruments are played by plucking the strings – which in a way is pulling and releasing a string, causing it to vibrate. Fingers or Plectrum (Pick) can be used to pluck the string.

Most string instruments belong to the Lute family. A Lute is a plucked string instrument with a neck and deep round back enclosing a hollow cavity. It will have a sound hole or opening in the body. It may be fretted or unfretted. A Fret is a space between two Fret bars on the neck of a string instrument. Frets divide the neck into fixed segments at intervals related to musical framework.

Sitar is mostly known through the works of Pandit Ravi Shankar who was an Indian Sitar Virtuoso and Composer (April 1920 – December 2012). Ustad Vilayat Khan was also an Indian Classical Sitar Player (August 1928 – March 2004). He was credited with the creation and development of “Gayaki Ang” on the Sitar. It was his attempt to mimic the sound of the Human Voice in Sitar.

The Instrumental Style Sitar is often fitted with a second resonator on the neck. It is a small Tumba – pumpkin or pumpkin-like wood replica. Usually seasoned Toon Wood or Burma Teak Wood are used to make this type of Sitar. It is fully decorated with Floral or Grape carvings. Celluloid inlays with coloured and black floral patterns are also drawn on it. There are 13 Sympathetic Strings, 3 Drone Strings (Chikari) and 4 Melody Strings with a range of Four Octaves in this style.

This style has only one Sound Box and mostly have 11 Sympathetic Strings, 4 Drone Strings and 2 Melody Strings with a range of Three Octaves. It has only simple ornamentation works on the body.

Normally a Sitar can have 18, 19, 20 or 21 strings. Six or Seven of these are “Played Strings”. They run over curved, raised Frets. The others are “Sympathetic Strings” which run underneath the Frets and resonate in sympathy with the played strings. These strings generally set the mood of the raga at the very beginning of a concert. The Frets are movable allowing fine-tuning and are also called as “Pardaa” or “Thaat”.

Sitars have two Bridges – Large Bridge (Badaa Goraa) and Small Bridge (Chota Goraa). Large Bridge is used for playing the Drone Strings and the Small Bridge for the Sympathetic Strings. The Bridges are made of Deer Horn, Ebony or sometimes Camel Bone. Mahogany, Teak Wood or Tun Wood are normally used for the Neck and Faceplate (Tabli). Calabash Gourd, known as Bottle Gourd is used for the Resonating Chamber.

Let us now watch a video explaining the Sitar and how to play it. The video is used only for illustration. Credit goes to the original creators of the video.